Cocoa farming presents one of the best business opportunity in Agribusiness. The demand for cocoa seeds worldwide is extremely high and the price in international market is quite encouraging to farmers. You already know what cocoa is used for. There will be no chocolate on the shelf without the cocoa seeds. Confectionery and Beverage making companies will go out of business if cocoa farmers stop farming.

You plant cocoa trees once and harvest it throughout your lifetime and still pass it to the generation next! Cocoa beans is one of the hottest agricultural product in the market anywhere in the world. If you have ever been to cocoa farm, you would realize how beautiful cocoa farm can be, probably one of the best place to get closer to nature.

Locate a large expanse of forest land with the appropriate climate and suitable rainfalls. Cocoa seedling is very sensitive and can die off quickly if not handled properly. Under the forest canopy is the ideal place to plant cocoa. The land you intend to use for your cocoa farming must be covered by rain forest canopy.  The trees need even temperatures between 21-23 degrees Celsius, with a fairly constant rainfall of 1000-2500mm per year.

Get good and improved cocoa variety from reliable source. International Institute for Tropical Agriculture will be a good place to get the cocoa variety with some advice. Or if you want to take the gamble, you just get the cocoa seeds directly from cocoa farm from an experienced cocoa farmer.

Clear the forest and plant the cocoa seeds at the beginning of raining season. Best period for planting cocoa is around April May when the raining reason is just picking up.

ALSO READ  Pig By Other Names: The Multiple Names For Pig And Pig Meat In English

Cocoa is produced in countries in a belt between 10ºN and 10ºS of the Equator, where the climate is appropriate for growing cocoa trees. The largest producing countries are Ivory Coast, Ghana and Indonesia.

The natural habitat of the cocoa tree is in the lower storey of the evergreen rainforest, and climatic factors, particularly temperature and rainfall, are important in encouraging optimum growth.

Cocoa plants respond well to relatively high temperatures, with a maximum annual average of 30 – 32ºC and a minimum average of 18 – 21ºC.

Variations in the yield of cocoa trees from year to year are affected more by rainfall than by any other climatic factor. Trees are very sensitive to a soil water deficiency. Rainfall should be plentiful and well distributed throughout the year. An annual rainfall level of between 1,500mm and 2,000mm is generally preferred. Dry spells, where rainfall is less than 100mm per month, should not exceed three months.

A hot and humid atmosphere is essential for the optimum development of cocoa trees. In cocoa producing countries, relative humidity is generally high: often as much as 100% during the day, falling to 70-80% during the night. The cocoa tree will make optimum use of any light available and traditionally has been grown under shade. Its natural environment is the
Amazonian forest which provides natural shade trees. Shading is indispensable in a cocoa tree’s early years.

Cocoa needs a soil containing coarse particles and with a reasonable quantity of nutrients, to a depth of 1.5m to allow the development of a good root system. Below that level it is desirable not to have impermeable material, so that excess water can drain away. Cocoa will
withstand waterlogging for short periods, but excess water should not linger. The cocoa tree is sensitive to a lack of water, so the soil must have both water retention properties and good drainage.

ALSO READ  How To Start A Cocoa Farm In Nigeria

The chemical properties of the topsoil are most important, as the plant has a large number of roots for absorbing nutrients. Cocoa can grow in soils with a pH in the range of 5.0-7.5. It can therefore cope with both acid and alkaline soil, but excessive acidity (pH 4.0 and below) or alkalinity (pH 8.0 and above) must be avoided.

Cocoa is tolerant of acid soils, provided the nutrient content is high enough. The soil should also have a high content of organic matter: 3.5% in the top 15 centimetres of soil. Soils for cocoa must have certain anionic and cationic balances. Exchangeable bases in the soil should amount to at least 35% of the total cation exchange capacity (CEC), otherwise nutritional problems are likely. The optimum total nitrogen / total phosphorus ratio should be around 1.5.

Criollos – This variety dominated the market until the middle of the eighteenth century, but today only a few, if any, pure Criollo trees remain. 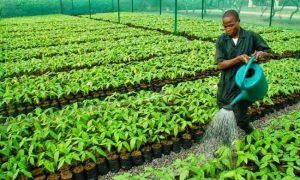 Criollo is considered the finest of the luxury cocoas. Only mildly acidic and hardly bitter at all, it possesses a mild cocoa taste with distinctive secondary aromas and hints of nuts, caramel, forest fruits and tobacco. Because the Criollo plant is more susceptible to fungal disease and other pests, it produces smaller yields and its fruits are therefore more expensive.

Forastero – This cocoa is considered the forefather of all cocoa varieties and delivers very good harvests thanks to its robustness. It accounts for some 80% of global cocoa cultivation. Typical characteristics of Forastero are its powerful, less aromatic cocoa flavour that can in some cases be bitter or acidic. The back looks hard and rough and can be found easily in Nigeria, Ghana, and Ivory Coast.

The Trinitario – This population are considered to belong to the Forasteros, although they are descended from a cross between Criollo and Forastero. Trinitario planting started in Trinidad, spread to Venezuela and then to Ecuador, Cameroon, Samoa, Sri Lanka, Java and Papua New Guinea.

Trinitario combines the hardiness of consumer cocoa with the pleasant flavours of luxury cocoa. Trinitario cocoa has a powerful, aromatic cocoa taste and is only slightly acidic.

Cocoa is raised from seed. Seeds will germinate and produce good plants when taken from pods not more than 15 days underripe.

Cutting – Tree cuttings are taken with between two and five leaves and one or two buds. The leaves are cut in half and the cutting placed in a pot under polyethylene until roots begin to grow.

Budding – A bud is cut from a tree and placed under a flap of bark on another tree. The budding patch is then bound with raffia and waxed tape of clear plastic to prevent moisture loss. When the bud is growing, the old tree above it is cut off.

Marcotting – A strip of bark is removed from a branch and the area covered in sawdust and a polyethylene sheet. The area will produce roots and the branch can then be chopped off and planted.